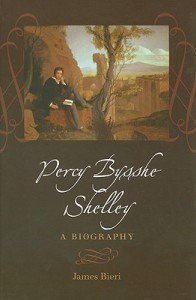 This biography started off slow, with some boring descriptions of upper-class English relationships. Lots of names that I barely paid attention to or remembered. But then once Shelley gets to university things get interesting.

Shelley knew how to present an argument incredibly well, even to people who disagreed with him. In an age before cat-fishing, he would pretend to be someone and write letters to get into debates with people of opposing views. He would get them to see flaws in their logic and before they knew it they had switched sides. Now that's a talent I'd like to have.

What makes Shelley such a compelling character is that he was so radical. He was under government surveillance and on the run from government officials (and debt collectors). He used various methods to get his work published and disseminated. In Lynmouth he put copies of his work into glass bottles and launched them into the sea. He was also openly atheist his whole life, and was kicked out of Oxford for it. He even wrote an essay called The Necessity of Atheism. His actions really inspire me to make every action a radical and revolutionary one.

I love that he believed as I do, that the military is a "profession beyond abhorrence and below contempt" because a soldier is "a slave...more degraded than a murderer" who is taught to "despise human life and human suffering" (p. 510).

What makes Shelley even more complex is that he was mentally ill. He had pretty bad panic attacks and anxiety, recurring episodes of depression and mania, paranoia, delusional fears of persecution, and hallucinations. However, Bieri avoids making any formal diagnosis, saying, "His hallucinatory 'visions' do not indicate Shelley was psychotic. His complex personality structure negates any simple diagnostic formulation. He appeared to be reacting to the cumulative emotional stresses" (p. 636). As if environmental stresses and trauma from a young age (which Shelley suffered from) aren't also causes of mental illness. To me it's obvious Shelley had bipolar and panic disorder. Still, I like the phrase "complex personality structure negates any simple diagnostic formulation," because I also feel like I have a complex personality that doesn't fit just one diagnosis or label. Creatively driven people usually do.

Shelley was also a bit of a player. He believed in free love, or polyamory, and had a penchant for having at least two lovers at any one time. He was every bit the dramatic Romantic and got Mary Godwin to date him by threatening to commit suicide, and tried to get her to commit suicide with him so they could be together in death. Yet after they married and had children, he complained of her coldness and heartlessness and went searching for warmth in other women's arms. He had a secret mysterious woman friend that he met in secret all over Europe, and wrote poems to ladies he fell in love with. He even had Mary publish these poems! Though they were sometimes missing more erotic stanzas that he added only privately in letters to the intended woman.

It was cool to hear about what writing project Percy and Mary were working on concurrently, and at which times in the context of their lives. This book was great at explaining how what they were writing was affected by events and people in their travels, sometimes tragic and sometimes beautiful.

So sad that he had an intense love of sailing but couldn't swim, and died in a storm at sea when his boat was swamped by water.